Once upon a time in the land of food, wine, all things artisan-made, all things handcrafted and all things delectable and grown in its glorious and bountiful backyard, the city dubbed the one of roses opened its arms and invited in those from all walks of life with one common goal: to listen, mingle and explore endless possibilities with like-minded individuals all in the name of food. The city was Portland, Oregon. And those gathered from the walks off life made up a group appropriately named the International Association of Culinary Professionals (IACP).


This enchanted story of once upon a time, actually didn't happen that long ago. Last week from April 21 to April 24, The New Culinary Order descended upon Portland and created what many heavily involved in the world of food and drink may look back on as a fairytale. What began its first night with an unforgettable host city reception at Portland's The Nines hotel transcended itself into four days of seminars focusing on all aspects of the culinary world; which began in the wee hours of the morning, and led to late-night rendezvous that included intimate sessions with food industry stars and hush, hush dinner parties throughout the entire city.


Our Days and Nights


Daytime workshops held throughout the Oregon Convention Center, The Portland Art Museum, The Art Institute and many more delicious Portland venues took hungry attendees through sessions and workshops on topics such as: Hands-On Digital Food Photography with famed food photographer and blogger Matt Armendariz; Oregon Truffles with author and founder of Oregon White Truffle Oil Jack Czarnecki; Guerilla Marketing for Culinary Professionals with Virginia Willis; and Recipe Development with blogger and recipe developer Amy Sherman. Those wanting to learn lessons and sit in with experts partook in Night Owl sessions held nightly including: Reinventing Your Food Writing Career with Dianne Jacobs; Self-Publishing: A Story from the Front Lines with Jean Duane; A Culinary Conversation with Anne Willan and Virginia Willis; and Culinary Hustling with culinary entrepreneur  and mogul Andrew Schloss.


Like any lover of the food world, or one who is looking to find their spot within this incredible industry, I was, of course, star-struck throughout the entire week. There is something magical about meeting those whose books you've read and adored or have given you inspiration, or those whose recipes have delivered to you unforgettable eats, or thoughts have caused you to view food in a different way. The stars at this show proved no different. A list of A-listers who set foot in Portland last week (Off the top of my head. It's entirely possible that I'm missing a few): Ruth Reichl, Judith Jones, Madhur Jaffrey, Michael Ruhlman, Andrew Dornenburg, Karen Page, Virginia Willis, Anne Willan, Andrew Schloss, Kim Severson, Dianne Jacob, Jaden Hair, Brad Farmerie, and many more. I remember attempting to take about a million pictures of Ruth, or which none came out. The iPhone cannot be depended upon for everything.


And I'm definitely not speaking about a filet. Congratulations to Portland's host committee, led by Mike Thelin. The conference was one that's conversations was off the charts on Twitter chatter (check out conversations at hashtag #iacp), and one that had many who could not attend in complete envy. It was one that raised the bar for future IACP conferences. I was happy to be here, happy to be involved with coordinating some of the events and as a volunteer, and so proud that it was in my home city. Honestly, there was no better place to be.


For my 'Some other things I just loved this week' section, I've picked out top highlights for me from IACP:

IACP 2011 will be held in Austin, Texas June 1-4. will you be part of the memories?
Some pictures from the week:

My best shot of Ruth

I left of Thomas Keller. Keller at the Awards Gala accepting an award for
best cookbook by a chef/restaurant: Ad Hoc

Ruhlman, Page and Dornenberg discussing the "Death of Recipes"

I'm a sucker for getting books signed
Cheers,
~JF

It's always a blast having friends who enjoy heading out to try new places (or at least new to us) around town. I have a couple of groups of friends who love to venture out for Sunday brunch. Last Sunday, a handful of us took a trip over to the eastside to try what I've heard to be a brunch hotspot, Toast.
Now one thing about me and dining is this: I hate waiting more than 30 minutes to be seated. And when I called to make a reservation for our party of seven at Toast, I learned that the tiny venue did not take reservations - something that I hate. But I bit my tongue and decided to hang in there - warning the group ahead of time.
I arrived at 10:30 a.m. as the group decided on an 11:00 a.m. meeting time - thought I'd get there and begin the wait for everyone. The tagline of Toast is ...A neighborhood restaurant. And that it most certainly is. As I slid into my parking spot directly in front of the door at SE 52nd and Steele, I was greeted by neighborhood patrons sipping coffee and chatting at the outside tables in the dreary Portland weather. I entered the incredibly quaint, yet bustling, restaurant and put my name on the list with our party's headcount.
As I grabbed a menu and a tiny, vacant chair by the door, I couldn't help but take in the ambiance of the place. Toast is the epitome of a cozy, neighborhood haunt complete with one room of, I'd say, enough chairs to seat about 40 eaters, a counter that surrounds the kitchen and resembles the classic neighborhood diner, and a restaurant owner who ensures everything is running smoothly - from what's hopping in the kitchen, to making certain that those waiting at the outside tables continued to have fresh, hot coffee in their mugs.
As, one by one, our party began to arrive, I was visibly concerned about our wait time, and Donald, the owner, could see it. He was quick to put me at ease that we'd be seated as soon as possible, and that they do accommodate groups from six to ten people on a regular basis. Basically, they make it work. He also offered to get drinks started (and by drinks I mean Toast's famed Bloody Mary's) for those who were eying them from the get-go.
An hour-and-a-half after my arrival, we were seated. And we were so excited! The menu looked amazing, and even though we had all that time to look over it and decide, we were all still undecided on what to order. Our server, Tiffany's, explanation of a special brioche roll with homemade caramel sauce was enough to get us started, then we each did our own heads or tails and got a move on with ordering our chosen dishes. 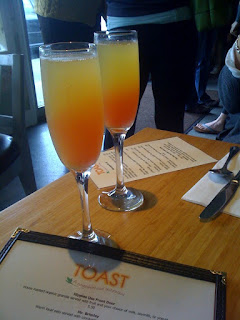 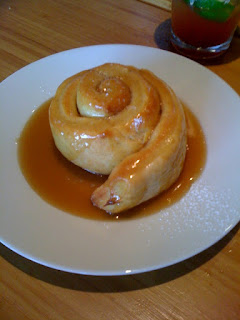 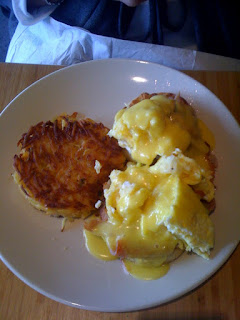 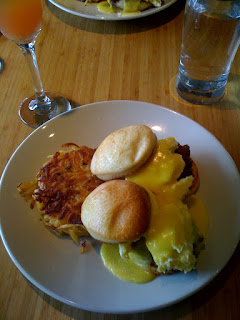 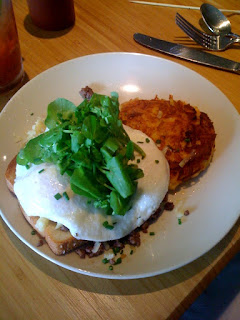 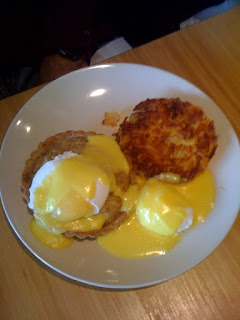 The Occasional Hedonist - that's a sweet onion tart under there 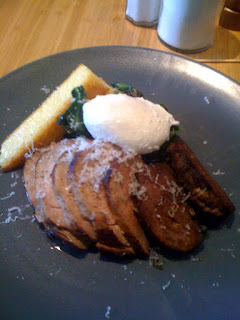 Honestly, I forget the name but believe it was a pork special for the day
When the group finished devouring the unforgettable eats, I did have to ask them all one questions: Was it worth the wait? I received a resounding, "Yes" from the entire crew. Yes...it was worth the wait.
Some other things I just loved this week... 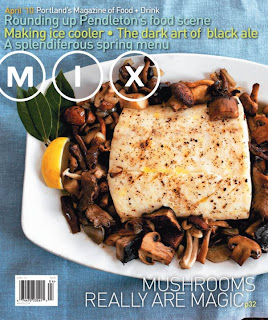